Thomas Merton and the Eye of a photographer

In my last post I spoke of Thomas Merton's skill as a photographer and of his admonition to a friend, who was busily snapping photos of the woods in which they walked: "Stop looking and begin seeing."

He gave himself to others in the same way, approached them without expectation. He saw them. He did not try to interpret, alter, or improve them, but allowed them to be themselves. In Conjectures of a Guilty Bystander he wrote of an experience he had during one of his first excursions outside the monastery into Louisville, KY. I love the final lines.

“In Louisville, at the corner of Fourth and Walnut, in the center of the shopping district, I was suddenly overwhelmed with the realization that I loved all those people, that they were mine and I theirs, that we could not be alien to one another even though we were total strangers. This sense of liberation from an illusory difference was such a relief and such a joy to me that I almost laughed out loud. . . if only everybody could realize this! But it cannot be explained. There is no way of telling people that they are all walking around shining like the sun.”
Posted by Beryl Singleton Bissell at 4:32 PM No comments:

Thomas Merton, besides being the revered spiritual writer who lofted the contemplative monastic life into public consciousness, was also a photographer. He photographed whatever crossed his path that drew him, he allowed each thing its own voice. While in the woods with a young photographer, he noted the speed with which the young man approached things. He told him to stop looking and to begin seeing. "Seeing is being open and receptive to what comes to the eyes; your vision total and not targeted." Song for Nobody, A memory Vision of Thomas Merton by Ron Seitz
Posted by Beryl Singleton Bissell at 9:48 AM No comments:

Seeking to live in awareness 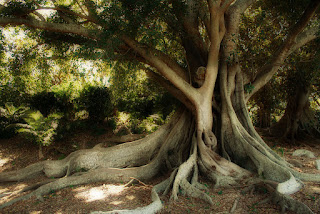 I've been away so long you might think I've fallen into Alice's rabbit hole. Unable to multi task, I've had to devote most of my time to working on The Glass Chrysalis. I hope this brief blog will renew my efforts to find room for God.

I read the following this morning and it moved me—presenting such a lovely synthesis  of what it means to live in awareness. God has given us he power to see with "such intense clarity." We have only to take the time to really look.
“Tree scrutiny . . . I stand apart and look; looking I respect almost to the point of love. But what I hope to be loving is God; not because he ‘made’ the tree, but because he gives me the power to see it with such intensity and clarity.”  -- Philip Toynbee “Part of a Journey”

Tree image by Prescott
Posted by Beryl Singleton Bissell at 9:02 AM No comments: