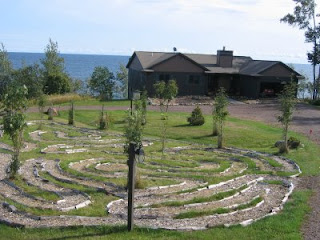 My husband Bill often calls our home Beryl's Monastery and in many ways it is. I am often here alone as Bill's work as a consultant takes him away from home for much of every week. I am blessed that my husband shares my desire to live spiritually. When he is home, we recite Lauds and Vespers together (sometimes the other liturgical hours) and we meditate together.

Bill is also responsible for the meditative paths we have around our house. One of these paths features several meditation benches overlooking Lake Superior and circles the knoll where we buried my daughter Francesca's ashes. But by far the most amazing meditative path is the labyrinth he built for us (and for whoever else wants to use it).


A labyrinth is not to be confused with a maze. A labyrinth is path designed to lead purposefully, in tight concentric circles or spirals, toward a center space. The walker then retraces his/her steps from that center back to the beginning.

Ours is not a traditional labyrinth, one that follows a pattern such as those found in ancient cathedrals or monasteries. Our labyrinth conforms to the topography of our land. It is defined by the shape, the ruts and ridges, of the wildflower field in front of our home.

It looks quite pretty tucked among the grasses and wildflowers, its meandering spirals bordered with split logs and filled with wood chips with providing a gorgeous blue backdrop. Bill and I have been walking it since he first laid it out two years ago.

My favorite time to walk the labyrinth is after supper as the sun begins to set. In winter the labyrinth disappears under the snow, but in spring, summer, and fall, it provides a wonderful place to remember that life is a journey and to walk it attentively. When I left for my first Vipasana retreat (insight meditation) last July with Resources for Ecumenical Spirituality -- an experience that combines Christian with Buddhist meditation practices -- I'd pictured a cozy silence where I didn't have to talk and could just moon around being thoughtful. I was sadly but wondrously mistaken. This retreat was not mystic rapture. This retreat was Dark Night of the Soul.

In July of this year I went back, this time with my husband Bill. Rigorous days. Rigorous nights. For 10 days we sat in meditation, walked in meditation and when we weren't sitting, walking or listening, we were moving purposefully -- reaching for doorknobs, putting on one's sandals, eating one's meal -- everything done as consciously and purposefully as possible. We did not read books. We did not write in journals. We kept total silence save during the lectures (1 lecture, 1 practice instruction daily) when we were encouraged to ask questions, or when we were chanting.

I must confess that this year, with my hubby there, I was not as focused as I’d hoped. Instead I worried about my type-A personality husband. Would he survive the first few days? Two other attendees had bolted early on and I learned later that two days into the retreat Bill was ready to high-tail it out of there as well. But he didn’t. He stayed and entered that intense silence with me. He's glad he went but he's not sure he wants to do it again.

There was one other married couple there. They sat together during their silent meals. Bill and I did not sit together. The other retreatants were not even aware that we were married – that’s how hard we tried to walk the Vipasana experience. I’ll write more about our retreat in my next post.

This retreat was offered by Resources for Ecumenical Spirituality -- an organization founded by 2 Carmelite priests and Mary Jo Meadows, an author, clinical psychologist, former professor of religious studies at and a practitioner of meditation for more than 30 years in the Christian, ashtanga yogic, and Theravada Buddhist traditions. For more information on their retreats and workshops, contact them at resecum@msn.com.