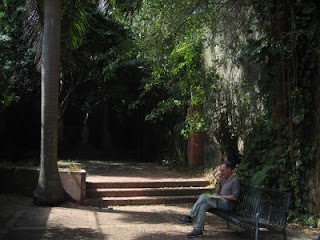 My husband Bill is noise sensitive. Sounds of traffic, noise from factories, lawn equipment and machinery drive him batsy. I, on the other hand, having spent many years in a cloistered monastery on a busy urban street am not bothered by noise. Bill will ask me if I hear a particular humming emanating from the rocks on which our house is built. I don’t, not until he’s pointed it out.

Anthony de Mello, in Sadhana, A Way to God: Christian Exercises in Eastern Form, addresses the issue of noise sensitivity during meditation. His Contemplation Groups often complain about the sounds around them, he writes, which intrude on their quiet and distract them. Rather than protect them from sound, he deliberately chooses places above or near busy streets.

“If you learn to take all the sounds that surround you into your contemplation,” he writes,”you will discover that there is a deep silence in the heart of all sounds.”

Modern life is noisy. No place is really free of noise as even the airwaves hum with electromagnetic and seismic signals. If we are to meditate (or simply to live in peace with noise) we must learn to find the “silence in the heart of all sounds.”

De Mello claims that sounds distract us when we attempt to run away or fight them. Rather than trying to tune out such sounds, he advises us to listen to the sounds surrounding us, even the smallest; to attempt to discover the sound within sound, the variations in pitch and intensity. In this way we become aware, "not so much of the sounds around you, as of your act of hearing."

Posted by Beryl Singleton Bissell at 8:59 AM 2 comments: 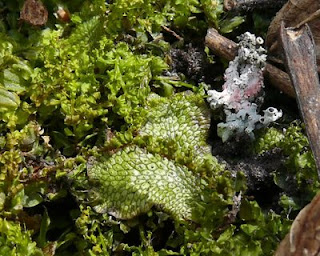 I am posting this lovely photo and poem by well known author John Caddy. John has been sending daily poems and photos for several years now and his site Morning Earth provides educators, authors, and earth lovers with ongoing inspiration.

On the forest floor
ancient lives are waking,
snake-skinned liverwort
and froths of moss
gone green again in their
waltz with time,
hugging soil.
But this new season
an odd bit of lichen
has dropped in
from the mystery above
to offer a frisson
of winterkill white
and a splash of pink
to the palette of spring's floor

Posted by Beryl Singleton Bissell at 11:16 AM 2 comments: