There’s a great story in the Washington Post about six Franciscan Friars who made a pilgrimage. At first I thought, oh sure, they probably traveled by air, and bus to the Holy Land with a bunch of American tourists. But no, these Friars never left US soil; they walked 300 miles from Roanoke, Virginia to the Monastery of the Holy Sepulcher in Washington DC.

They traveled: without without money, water, food, or advance provisions for shelter in the spirit of their founder, St. Francis – the Little Poor Man of Assisi. Along the way, they relied on the kindness of strangers. And the ecumenical flavor of those kindnesses filled me with an inner joy. If you haven’t already read about this journey, you really must read the story from the Post. It’s one of the most delightful news stories I’ve read in a long, long, time.

I remember being filled with that sort of spirit years ago when I was a teenager. In the years that have passed, I've lost much of that spirit. I love having my beautiful home, not having to worry about food or clothing though I realize that such gifts are subject to sudden change. We read about it daily in the news: entire populations fleeing flood, drought, and famine; working families losing their homes; catastrophic illness wiping out a family's savings.

My prayer has always been to accept whatever confronts me with trust; to believe that good can be found even in tragedy. I try to live generously and hopefully, to spread more joy than fear.

When disheartened by failure, I remind myself that I am on a pilgrimage like those friars. Unlike them, I travel without a halo, and with entirely too much baggage. I hope to discard some of it along the way.
Posted by Beryl Singleton Bissell at 8:34 PM 5 comments: 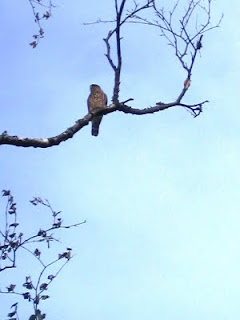 Spare on warmth, our summer has nevertheless been rich in sightings. The other day Bill and I happened upon a “kill” in action – a sharp-shinned hawk diving a song bird. We watched in awe as the bird lifted off with its prey and disappeared into the woods. While heading up our driveway to get the mail, I’ve encountered on several occasions a roly-poly groundhog, though I haven’t seen him lately. While larger than this small hawk, the groundhog might have succumbed to a hawk attack, especially as there are three of them making continual appearances here, spiraling above land and lake, their rapid, staccato, high pitched cries steaming after them. I’ve lived here for 11 years without seeing one of those birds. Now I seem to have acquired a family of them.

Daily, I spot eagles flying over the lake. Today I saw two of those mighty birds, flying together, their immense wings undulating and graceful. The hawks, on the other hand, fly very fast with a rapid beating of wings, so fast that from a distance they resemble swallows or larks. Save for their markings, and the fact that one hung around me for close to half an hour, filling the air with its cries while perched above me on a tree, I’d not have known that those spiraling birds were hawks.

Then there’s the copious scat marking the nocturnal passage, across our driveway, of one or several lumbering bears. To date they seem to prefer the upper section of our long driveway, but I well remember the star -filled night that I stood on my deck and felt the hair rise on my neck, warning me of a “presence.” The next morning my bird feeders had disappeared, replaced instead by the muddy swipe of a massive clawed foot on the window in my office.And what of the racket of 10 or more crows, dive-bombing a raven, hopping across fallen trees as if unable to fly. That raven was around for several days. I know because I’d follow the crows cries into the woods and see them still threatening that raven. Once he hopped next to the car as I headed down our driveway.

There are times when I can almost feel the momentum of this spinning cycle of life and death – a harsh reality save that this cycle is also the source of ongoing renewal. We live, we die, we return to the earth, and the earth in turn gives birth to new life. The scriptures feeding my spiritual life are filled with such references. Isaiah 38 never fails to amaze me with the poetry of its images. "Like a shepherd's tent my house has been pulled down and taken from me. Like a weaver I have rolled up my life, and he has cut me off from the loom; day and night you made an end of me."

Signs of God surround our lives. The Biblical writers knew this. They attributed everything that happened to God, but we've lost sight of that worldview. It is difficult to miss signs of God’s presence in the environment where I now live, but when living and working in the Twin Cities, I had to keep reminding myself to stay open, to find in even the most shattering experience the presence of God, to encounter God in the most gentle and insignificant of happenings. King Hezekiah was spared but eventually he had to die, as must we, but meanwhile we move within the grace of a life where God is present everywhere if we but open our eyes.

Photo: The hawk was so high in the tree and my camera had limited zoom but this is the hawk that serenaded me.