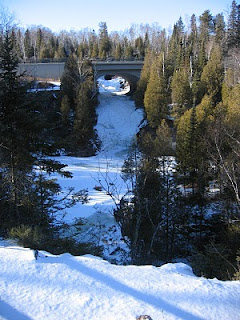 Lake Superior’s North Shore is a craggy, rugged land with only six inches of topsoil on some of the oldest rock exposed rock on earth. Over 90 % of the land is state and national forest. Two thousand square miles of land with an average population according to the latest census of 3.6 persons per mile. Towns are small. The town where I live boasts fewer than 200 residents.

It’s quiet up here, the predominant sound that of waves crashing against ledge rock, and the peregrine falcons and ring-billed gulls cruising above. It’s a place where you’d better love the out-of-doors because there is little indoor activity to distract you. TV reception is inaccessible unless you have satellite and that’s expensive. Night life focuses primarily on lodges and taverns, when they’re open, the occasional community theater production or visiting musical group.

Those who don’t live here wonder what we do with ourselves. There’s little industry save tourism. Mostly the area caters to tourists, artists, people wanting to escape city life. In warm weather we hike, pick berries, watch birds, canoe the boundary waters and challenge Lake Superior in kayaks. The lake is too cold for swimming. In winter we hunt, snow shoe, ski, run sled dogs, watch the night sky. Deer, wolves, bear and an occasional moose wander our woods.

It’s a perfect place for a monastery, here where God’s bounty is so clearly visible. Contemplative living should flow naturally in such a place, one would think, yet perfect places do not guarantee perfect lives. Always we lug ourselves around, not seeing clearly, not listening closely, always dependent on God’s love to rekindle the fires of yearning within us. Advent approaches, reminding us that the Incarnation was willed through eternity as an expression of God’s love for us.

In a beautiful meditation on Advent, Sallie Latkovich CSJ writes that in Advent we contemplate the three ways of Christ’s coming: in history, in our daily lives, and in the second coming.

“I’ve been thinking that we’ve got it all wrong,” she writes. “We need not wait for God. God is always present, always with us . . . this Advent I’ve come to see that it’s GOD who waits for us . . . [God who] waits for us to notice the myriad ways in which God is with us, always.”
Posted by Beryl Singleton Bissell at 5:16 PM 1 comment:

Time as a fountain bubbling up, not running out

I asked myself this question as I plowed through 23 years of accumulated journals, medical reports, letters, and notebooks, trying to connect the disjointed but important factors of the story leading to my daughter's violent death nine years ago. I felt like I was in a train station wild with the mess of gates, and timetables and platforms and levels with time breathing heavily behind me.

There is another way to deal with the pressures we impose on ourselves. We can think of time as a well bubbling up into our days -- monk's time as referred to by Brother David Steindl-Rast in one of my favorite books, The Music of Silence. Monk's time is not chronological. It is what the Greeks called the kairos: time as opportunity or encounter.

The thought that “there is always enough time for the task at hand” frees me when I hit the barrier of my limitations; when I worry that I might not have another 10 years to finish this book, as I had with The Scent of God. It is in Kairos that I will catch the muse’s hand, not in the train station while waiting for inspiration.
Posted by Beryl Singleton Bissell at 7:59 PM 5 comments:

The violence of the daily

How intriguing to find Merton relating "good deeds" to the "violence of our times." Certainly, the issues he mentions are ones that concern all who struggle to make good use of their time. Merton, however, is not accusing the works themselves but the way in which we perform those works.

In reflecting on this, I realize that I succumb to this violence each time I forget to be fully present to whatever it is I am doing. Each time I rush through the "now" to get to what should be an “attitude” but instead has become a “place,”: Inner quiet and focus.

Why quiet should be a place toward which I rush might stem from my monastic days when we were warned against the prayer of silence or centering which the church termed “the doctrine [heretical] of quietism.” Catholic Encyclopedia.

"Generally speaking [quietism is]a sort of false or exaggerated mysticism, which under the guise of the loftiest spirituality contains erroneous notions which, if consistently followed, would prove fatal to morality. ...In its essential features Quietism is a characteristic of the religions of India. Both Pantheistic Brahmanism and Buddhism aim at a sort of self-annihilation, a state of indifference in which the soul enjoys an imperturbable tranquility. And the means of bringing this about is the recognition of one's identity with Brahma, the all-god, or, for the Buddhist, the quenching of desire and the consequent attainment of Nirvana, incompletely in the present life, but completely after death."

Thomas Merton helped turn this doctrine on its head by reminding the Church of it’s ancient mystical traditions, diffusing the threat of "heresy," and introducing millions to lives of contemplation. Rather than warning against the falsity of eastern mystic traditions, "Merton was a keen proponent of interfaith understanding. He pioneered dialogue with prominent Asian spiritual figures, including the Dalai Lama, D.T. Suzuki, the Japanese writer on the Zen tradition, and the Vietnamese monk Thich Nhat Hanh."

Every morning I turn on my computer and receive a lovely photo and poem by award- winning poet John Caddy. I've know John for many years. When I first began working at Milkweed Editions (a superb literary press in Minneapolis) there was a lot of excitement when his book The Color of Mesabi Bones won the Los Angeles Times Book Award. I have his permission to share this recent post with you. It brought a sense of freshness to a cold March morning on Lake Superior. 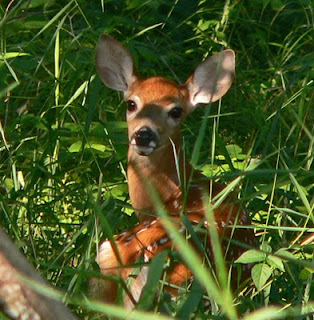 We are tender toward the young.
Gentle in our eyes are lives just opening:
Smalls, the risen seed, the nestling’s gape,
grasshopper nymph in perfect miniature,
a tulip bud just coloring,
the spotted fawn in ferns,
all the small who are potentials,
all the lives of innocence:
but how helps this our survival?
Why feel so far beyond our kind?
Perhaps to make us tender
for a moment toward our selves.


It is not fashionable to explore our interconnectedness with the Others. It is almost reflexive to accuse such attempts as excessive sentiment, but this is really just a last gasp of the gendering of science.

Explore your own responses to other lives; wonder how such feelings came to be. -- John Caddy
Posted by Beryl Singleton Bissell at 7:17 AM 1 comment:

A winter circus in the woods

When my husband Bill, who works in Northern Alberta, was home 10 days ago, we decided to go snowshoeing in the deep woods along the Superior Hiking Trail. When we started out, we had no idea we'd become slightly intoxicated by the beauty that awaited us. The woods were literally snow-bound: the firs and pines, protected in that forest, still bearing the white muffs they'd donned the prior week. Sun and shadow mingled to create a landscape that shimmered with wonder and the ice that filled my soul a week earlier melted into the landscape.

I felt like a child at a circus. Everywhere I looked, bent limbs of trees supported animals in parade. Pine martins, ravens, and red squirrels danced with elephants, hens and sea horses. These exquisitely delicate sculptures of snow and ice transfixed me. I kept stopping in amazement. Look! There! That mouse was definitely dancing. And over there. Wasn't that tiger stalking? That horse rearing?

"Are you doing okay?" Bill shouted back to me. As usual, he was far ahead and felt obliged to check on me periodically.
"Do you see all those animals?" I shouted back.
"What animals?"
"The ones on the trees. Snow shapes. They're everywhere." Bill shrugged and moved on. His wife was imagining things.
Occasionally, frozen gems cascaded from branches high above me. I told Bill to watch for them.
"I haven't seen any," he responded.
"Just look," I encouraged, and laughed when the globules fell after he'd passed.

We returned to the same trail the following day, hoping to repeat the journey. This time I brought my camera but though the temperature was the same, the cold was more severe. Both Bill and I had trouble with our fingers. Mine hurt so badly that I raced along trying to warm up, not daring to stop to take pictures. When after half an hour, the pain in my fingers had me near tears, we turned around and hastened, as fast as our clunky snowshoes could manage, to the car. On the way home I comforted myself with the thought that perhaps the wonders I'd seen the day before had rarefied to the point where they no longer looked like the circus parade that had so enchanted me. Perhaps I was meant to hold the miracles of that other day in my heart and mind, rather than imprison them in a static photo. After all, I don't have the skills to capture falling gemstones or lure an observer into my circus.
Posted by Beryl Singleton Bissell at 5:29 PM 3 comments:

Ice in the Soul

If there is a relationship between spiritual aridity and winter, it must certainly be the cold. And the ice. Ice, that brims the ditches and with each sleeted rainfall threatens to overrun the roads, has taken up residence in my soul.

To pray, to meditate, even to recite the hours of the liturgy requires a diligence that locks my jaw and shutters my eyes. These periods of darkness fill me with a nostalgia for the delight I once took in prayer. I am reduced to living moment by moment, hoping that in so doing I am actually in God's presence; choosing to believe this is so, because not to believe would be more than I can bear.

I'd like to believe that this is the Dark Night of the Soul of which John of the Cross speaks so eloquently -- the prelude to divine union -- rather than the acedia of which the desert fathers warned us, the deadly sin of sloth that creeps without warning into our lives. I remember that ice turns luminous when held to the light. I lift my iced-soul to God.
Posted by Beryl Singleton Bissell at 8:07 PM 7 comments: